On November 1st, on my birthday, I and my family left for an 8 day trip to .

We needed to first go to by train and then catch our flight to Kolkata at . We reached by noon and the flight was at 7:30 PM.

We lunched at a hotel near the railway station and then left for the . It was about evening when we reached there. As there was a lot of time for the departure of our flight, we roamed around the airport and then made way for the security checking. A heave of sigh after the checking, we waited for the flight to arrive. In a few minutes the flight arrived and we boarded our flight.

I was wondering that this birthday wasn’t exiting, but it was an unforgettable Birthday experience I’ve ever had! We dined the wonderful cuisine that were served in the flight

And thus I celebrated my Birthday in the flight! It was almost 11:00 PM when we all reached Subash Chandra Bose airport in Kolkata.

I found that there was a change in the atmospheric air at Kolkata when compared to . It was because of the amount of greenhouse gases released in Kolkata was more.

I never imagined that Kolkata would be the filthiest place I had ever seen till now.

Though the streets were deserted at night there was a terrible stench around.

Finally we reached Hotel Ashoka, one of the cleaner hotels in Kolkata.

Well maybe it was. We were given an underground room, without any ventilation.

Inside the room there was a stench of cigarettes and smoke. We just managed a sleepless night whit the fan and the light on. Then it was time to rise and shine. The guide took us to . The floor was covered with sticky water and wilted hibiscus flowers, and a big mob of people covered in front of the door of the deity. The mob were pushing and falling on each other to get a ‘darshan’ of the goddess. Some men at the temple pulled some people and told them that they would give a chance for the ‘darshan’ of the goddess. They would then give them the ‘prasadam’ and ask for the fare.
We had our breakfast of idlies at a South Indian hotel and made way for the hotel.

We left for the airport. We finished all the security checking and then boarded the flight which for ready for departure for Bagdogra airport. We lunched in the plane among the clouds and finally reached our destination in 40 minutes. 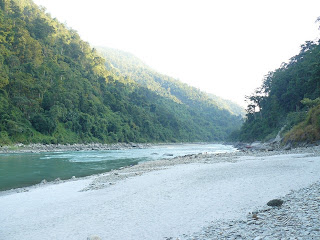 We boarded the tata sumo that were arranged and started for Gangtok. The road was terribly bumpy with a lot of potholes! Then we reached the foot of the hills and the only way to reach Gangtok. There were a lot of curves and hairpin bends. A tough time among the huge hills and it almost took 5 hours to reach Gangtok. The road was terrible and in spite of nausea I and my family stopped the driver. The driver showed us the sweetest water. We were all thirsty and we all just quenched our thirsts with the killing sweet water!! It was absolutely pure and sweet water I had ever tasted in my life. The source was not known to us but it was flowing among the trees and bushes atop the hills.

We were also accompanied by a couple who were our family friends. We came across the river Tista. On of the longest river, and we were accompanied by the river through out our journey to Gangtok. The sight of the river fascinated us and we managed to find a way to get down to it. My father found a small path and he was followed by me and my sister and my mother. I and my father got down first to take snaps. My sister and my mother watched me get down and could not resist the opportunity and then followed me.

The sand was fully white and the water was all blue, with green trees around, it was a breath-taking sight! The water was cool and refreshing and was absolutely free from pollution. We took pictures and then headed back for the car. We traveled for almost 4 hours and we reached Gangtok in the night at about 8:15. The sun sets at about 5:30 and 8:15 seemed to like midnight! We stayed at hotel Golmaheem .The rooms were awesome and so were the facilities. We watched television for a while and as were very tired we had dinner in the dining room. The night was very chilly and we went to sleep. 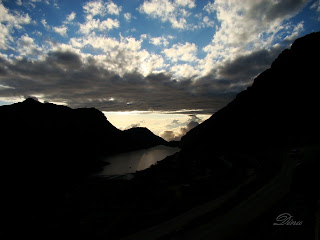 The sun had rose at 5:30 and we too got up to get ready for sight seeing. We had our breakfast and left at 8:15 AM. Children were going to school in the chilly morning. A taxi was arranged and we traveled to Baba Mandir. Baba Mandir is a memorial of a soldier, Harbahjan Singh, who died in a mishap and is believed that he comes in the dreams of some soldiers and is said to have experienced miracles. Soldiers at the borders is said to have confessed in a meeting that an unknown man usually at midnight walks near the border. The Indian soldiers believed it to be Harbhajan Baba. Many miracles like these are attributed to him. We then planned to visit Thukla, a place near to Baba mandir,

This was 12 km far. There was the old Baba mandir. We were 20,000 feet high above the sea level, and breathing became a bit hard. Travelers were provided with a cup of hot tea free of cost. The best tea I had ever tasted! After visiting the old Baba mandir we made way to play in the snow which was available on the way. First experience in the snow and it was terribly cold! We enjoyed for some time digging the ice and snow. We even took pictures and then left for Gangtok. On the way we stopped at . There were yak rides too. Till now Tshongu lake was the coldest place ever experienced. I rode the yak and took snaps and then left for the hotel. It got dark very soon and there were no such street light facilities.

We reached Gangtok at about 7:15 PM. We rested for a while and went to have dinner. 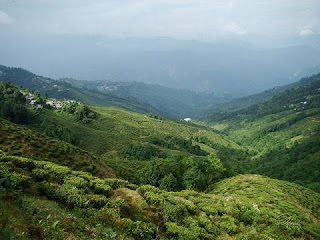 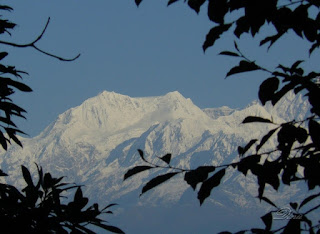 We had leave for the next morning. We got up early and got ready to leave. After breakfast we left for and it were raining slightly. We neared ; we stopped at a tea stall for some fresh and hot tea from the yak’s milk. After the refreshment we left for . We had almost reached there but we were caught in a traffic jam. It took nearly 15 minutes to get away from it and we were at hotel Meghma.

We reached there at about noon; we had lunch and then rested for a while. Then we were taken for sight seeing to and Rock garden. There were lots of colorful flowers in the park Even the rock garden had many of the beautiful flowers. In the evening we went for shopping. The day was over and we went to sleep. The next day was scheduled for 5:00 AM in the morning to leave for tiger hills for sunrise. We waited in a hall at tiger hills to view the magnificent sunrise. About 15 minutes and we had almost lost hope for the clouds. But after the 15th minute the bright, orange sun rose slowly and the spectators were also busy clicking snaps of it. We came back quite happy. Had our breakfast, took a bath in the biting cold and then left for the and Mountaineering Institute. There were some rare specimens like the Red panda and the snow leopard. We looked around the zoo led by our guide Laxman and headed for the mountaineering section. There was a museum of the articles used by the famous mountaineers who had conquered the Mt.Everest. 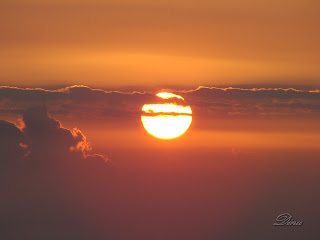 Next we came across the tea gardens. We had a ‘few’ cups of tea for free and the made way for Tenzing rock. This is a big rock used for basic mountaineering training.

I woke up early in the morning to find out that I had fever, because of the sudden weather change, from biting cold to killing heat. With a lot of difficulty I made it to the flight and I suffered all along the way to . In the flight I was given fresh fruits for breakfast a cookie and a cup of hot black coffee. From we boarded a bus for and perhaps I was the happiest when we all reached !

Whenever I recall this all I want is to be like and Gangtok.

It is an awesome place to ‘visit’. A man has to visit such a place in lifetime. The people there were kind, friendly, helpful, obedient.Do visit the wonderful place.