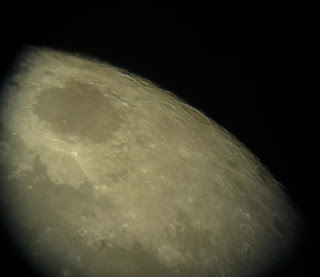 Picture if the moon taken from the 14-inch telescope

Social science contest on a bright Saturday, a prepared me wrote the exam with full tension. A dejected I returned home with sheer disappointment.

I wondered” who cares”, and began my normal routine.

It was a bright full moon evening, and I stood out dazing at the glamorous golden bright moon at its fullest! It was such a pleasure and I forgot all my vows.

I ran and called my mom and dad to also enjoy the sight of the moon.

My dad being my dad, could not just see it, but he took pictures of the moon from every angle he could, he went to the road, he went up the terrace, fixed the camera to the tripod too, but it was not a satisfactory photo shoot of the moon for him. It was also the time when mars were very close to the moon and the earth.

It was almost 8:15 in the evening, when he came up with the idea to go to Ramakrishna Ashram for star gazing. So loading his vehicle with me and my sister, we were off. We met Mr.Ramaswamy, a well experienced teacher, and an old man, teaching in that ashram for a very long time.

We requested him to guide us about the telescope and astronomy.

The kind man adjusted his 10-inch telescope to the moon, and explained us about the craters and the hills on the moon. The bright light dazzling from the moon made our vision go away for a minute! In the same way we got to see a magnified image of the brightest star of the night sky, the Sirius, and the , mars and the Orion nebula. It was a treat to the eyes to view the magnified moon. Then all the students of the ashram started to come and soon it got crowded.

We even got to see the moon from a 14-inch computerized telescope at the observatory. Now the moon was much brighter and everything went black after seeing it, due to glare ness. It was like we were on an abode to heaven!

It certainly was such pleasure that it was almost like we had landed on the moon itself. It was so much fun learning things which we were unaware.

It was then that I came to know why the moon is used for a simile.